PeerTube v4, more power to help you present your videos

Customization, content discovery, empowering through more control… Here is an overview of the new version of our software solution to create alternative platforms to YouTube and federate them together.

Each week of Fall 2021, we want to present you the diversity of what Framasoft does. As these actions are funded by your donations (66% tax-free for Fench tax-payers), you can find a complete summary, in the form of cards to click and flip, on the website Support Framasoft.

PeerTube is a free software that, once installed on a server, generates a video hosting platform. This platform can be federated, to share its video catalog with other PeerTube platforms. It also provides a resilient video broadcasting system, which combines peer-to-peer and traditional streaming.

Today, PeerTube is a whole ecosystem: with an index of nearly 900 public « instances » (that’s how a PeerTube server is called), a search engine, dozens of plugins to adapt one’s instance to the needs of the content creators they hosts… But also tens of thousands of lines of code and hundreds of thousands of videos. 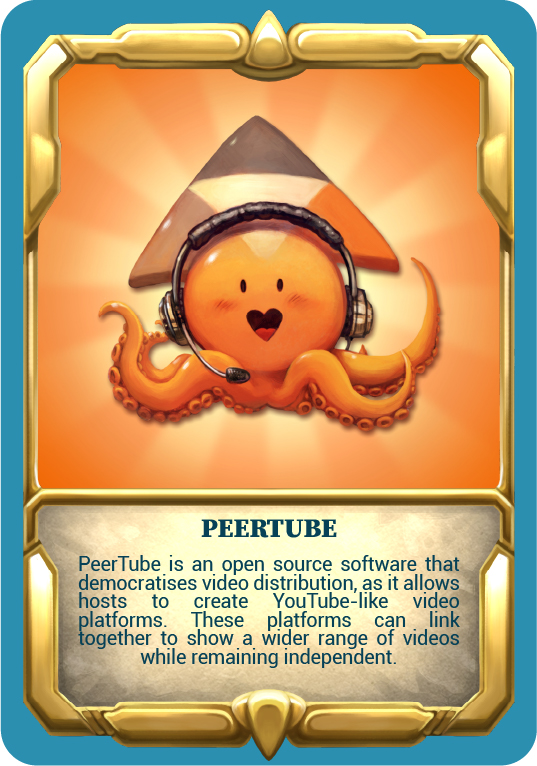 A year of work since adding live streams

Last January, the 3rd version (v3) of PeerTube was released. The big new feature was the ability to stream live videos in peer-to-peer.

Version 3.2 of PeerTube was released by the end of May. It allows content creators to customize their channels. Viewers also get better control of their viewing (automatic recover of views of downloads when interrupted, improvement on the video player contextual menu…).

Late July, version 3.3 offers administrators of a PeerTube instance homepage customization: add text, banners, highlight videos, channels, playlists. In addition, playlists now appear in search results, we have also shortened the web addresses of videos, channels and accounts, and the display of languages that read from right to left is now fully supported.

In early September, PeerTube version 3.4 was released. The video player became more convenient and fluid. Instance administrators can now federate only to an account or a channel (without having to federate with the whole instance that hosts them). But above all, it is now possible to filter videos on a page that displays several videos. For example, on the page of a channel you can display only the videos that are in French and that talk about cooking.

The fourth version of PeerTube is scheduled for late 2021/early 2022. But as of today, we are publishing the Release Candidate of this v4, that is to say, the almost finished version that we will test for bugs and unexpected behavior. So we can already tell you about the new features!

The big new feature of this v4 is the table view of all the videos of an instance. It will facilitate instances administration and moderation by allowing you to select a batch of videos to apply the same action in bulk: delete them, block them, transcode them to or delete a certain video format, etc.

The advanced filter features make this bulk processing easier, by distinguishing between local videos (hosted on one’s own server) and remote videos (hosted on servers with which one has federated), or by sorting by publication date, for example.

Content creators will also be able to benefit from features to better manage all the videos on their PeerTube channels or view their subscribers. For now, this subscriber view is basic and doesn’t allow for (much) action, but it’s a foundation we’ll be able to build on to meet many needs.

Another new low-tech feature in PeerTube is the introduction of 144p video resolution. This is very low bandwidth-friendly, and can be very useful for weak connections, audio broadcasts, or videos where you don’t need to see very fine details.

Finally, the release of this v4 is the occasion of a big winter cleaning. The configuration, the code, but also the API (that allows other software to interact with PeerTube) have been reviewed, modified and improved.

Our contributions to the PeerTube ecosystem

Indeed, PeerTube is now an ecosystem of instances, content creators, third party clients, plugins, contributors… An ecosystem of which we are but one member.

Throughout the year, we have improved the JoinPeertube FAQ, moderated our search engine index, responded to issues (software feedback) and reviewed pull requests (code contributions). After a recent audit offered by NGI, we worked on the code of the official JoinPeertube website to improve its accessibility.

We also funded and supported two external developments that greatly improve the live experience. On one hand, we helped the PeerTube Live Chat plugin. It allows instances adminnistrators to add chat functionality to their content creators’ live streams. On the other hand, the PeerTube Live App, which allows anyone with a PeerTube account to broadcast lives from their Android smartphones (available here on Fdroid and here on the Google Playstore).

One of the recent evolutions of the PeerTube ecosystem is the multiplication of large instances, which host many videos. This creates new uses and new expectations that we try to meet.

For example, we communicate with one team of the French Ministry of Education, that works on apps.education.fr, a tool where teachers in France can find many freeèlibre services, including PeerTube hosting. Our goal is to get a better understanding of their needs and use cases, and to find ways to facilitate their contribution to the PeerTube community.

The first project is to test this v4 Release Candidate, collect feedback, apply fixes to release a stable v4 by the end of 2021 / early 2022. After that, it will probably be necessary to take some time to rest, and prepare a roadmap for the upcoming year.

Even if we don’t know yet what form PeerTube v5 will take, we can already tell you about our intuitions, and especially the points that caught our attention:

The list is far from complete and we’ll keep listening to your ideas (for example on our forum)… But we already know that we won’t be able to do everything, not by ourselves.

In 2021, we received a 50 000 € grant from NLnet (from European funds) for our work on PeerTube. This external funding allowed us to avoid having to prioritize « sexier » features in order to get a successful crowdfunding. So it’s thanks to this support from NLnet that we were able to make significant improvements that are not super-bankable, but necessary when you want a mature software.

The growing success of PeerTube implies an increasing amount of work to maintain and respond to the people who use it: understanding and solving bug reports, reviewing and integration of code contributions (commits), answering questions and requests on the forum, on the chat and on the software forge (already 3100 issues processed for about 400 pending)… All this work, not very visible, is mainly done by Framasoft.

We estimate (roughly) that the NLnet grant will have financed two thirds of the total cost of this project in 2021. This means that we have taken 25 000 € from the annual budget of the Framasoft association, so from the donations of the people who support us. We did not ask NLnet for 2022 funding on PeerTube (because we did it for another of our projects: Mobilizon). 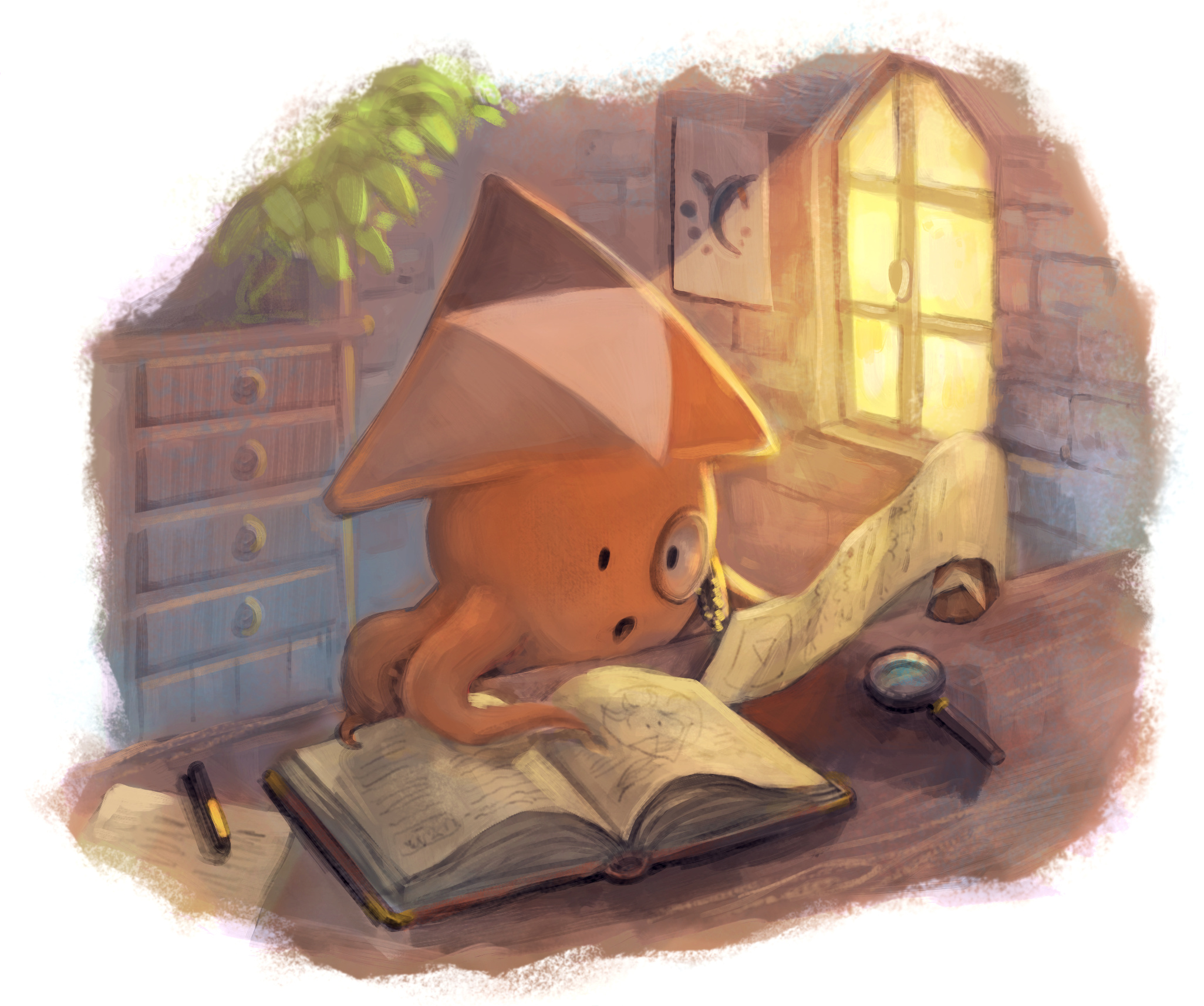 However, Framasoft is (and wishes to remain) a small not-for-profit association https://framasoft.org/en/association , with about 40 members, including 10 employees. We maintain many actions (summarized in a deck of cards to flip on our donation page), and only one of our developers can devote about three quarters of his time to PeerTube.

If you would like to support the funding of PeerTube in 2022, please donate to Framasoft. By the way, in France, the Framasoft association is recognized as being of general interest and thus gives rights to tax deductions (so that a donation of 100 € will be – after tax deduction – 34 € for French taxpayers).

Thus, in addition to supporting PeerTube, you will finance many actions to facilitate digital emancipation, and emancipation through digital.

We count on your contribution!