Change the software of the people who change the world ?

From climate walks on Facebook to free software hackathons using Meetup : to change the world, utopians (like us !) too often organize themselves on the centralized platforms of web giants.

We are not going to repeat here how clicking on « I join » in a Facebook event « Vegan Barbecue for Social Justice » raises many issues : it says much more about you than you can imagine, it gives a significant power to Facebook advertisers and locks the event community into a tool that will prevent it from being self-organized and thus from enduring. And that’s without mentioning the rules of use of these platforms, which can lead to a closing, without the least justification, from one day to the next, of a group or a communtiy, and of which the centralized structure forms a potentially unique portal for security services and pirates with bad intentions.

Mock-up of an Event page in Mobilizon

At Framasoft, we thought it was important to take the time to think about an alternative that could change the situation. We have just spent a few months, with the help of two designers (Marie-Cécile Paccard and Geoffrey Dorne) who haved interviewed many activists so as to better understand their digital practices. We looked at what a tool that would really empower individuals and groups could look like.

The tool that surveillance capitalism companies will not make

If you think about it, it’s massively constraining to create a tool that is just good for sucking up and selling data from all over the world…. As long as we do not need (or want) to track people or maintain an unfair economic model, we can imagine a tool that makes a difference.

The last thing Meetup, Eventbrite or Facebook want is for us to do without them, take their place and create our own event publishing platform. This is the first of the freedoms Mobilizon will offer : to free people from those money-, data- and attention-grabing companies.

Of course, you might not be able to install it on a server yourself and create your own Mobilizon instance. But the fact that a community, a trade union, an NGO, a movement, a federation, that is, any collective can freely emancipate itself from data-hungry platforms, feels essential to us.

Along these lines, making the source code, the « cooking recipe » of the software, public is paramount to us : not everyone can read it, but it is a guarantee of transparency and openness. If the team that develops it makes choices that do not suit me, I can set up my own team to experiment with different design choices and another governance system. 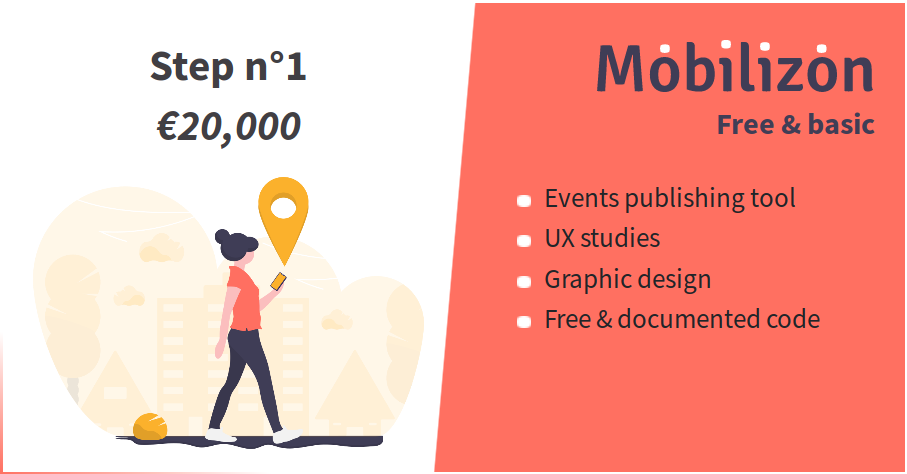 2. A tool that emancipates by federating

No : it would be a huge strain on end-users. This is why we want Mobilizon to be federated : each instance (event publication site) powered by Mobilizon will then be able to choose to exchange with other instances, to display more events than « just its own », and to promote interactions. The federation protocol, based on the most widespread standard (called ActivityPub), will also allow, in the long term, to build bridges with Mastodon (the free and federated alternative to Twitter), PeerTube (alternative to YouTube), and many other alternative services.

However, the concept of federation is not a magic wand. On the contrary, it requires even more effort : displaying your moderation policy, communicating with the people registered on your server, choosing with whom you can federate or not, applying your legal obligations (or practicing civil disobedience)… An emancipatory Mobilizon should, in our opinion, facilitate these relationships between the people who open their instance to registrations, and those who entrust them with their data.

3. A tool that is, ideally, user-friendly

Ideally, Mobilizon not only frees us from Facebook events, but also frees us from its groups. And to have user-friendly groups, you have to imagine messaging tools, moderation tools, in short : many features that make us autonomous.

Because a user-friendly tool is a tool that gives us power, that gives us control. Thus, it is a tool that allows each group to organize itself as it wishes. Ideally, Mobilizon offers groups a space to display links to its digital collaboration tools, whatever they are, even google docs (but honestly, Framapad : it’s even better :p).

Another example of empowerment : if I want my family, who invites me to the youngest child’s birthday, to see my militant commitment (say for a pride march), but not my cultural activities (say folk dance), I must be able to control it. Ideally, Mobilizon allows each account to create multiple identities to partition its groups and activities as desired. 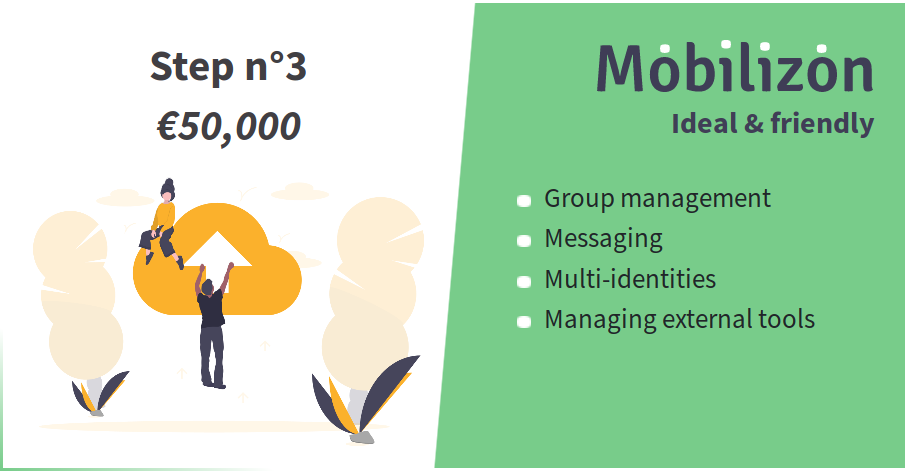 4. A tool that is sustainable and resilient in the long run

Software is a constantly evolving tool. Of course, producing a first stable version is a challenge in itself. But it is also the first step in a longer process, where we discover uses and practices that were not anticipated, that we can support.

There are already many possible evolutions for Mobilizon : facilitate geolocation and mapping, develop a mobile application, improve ergonomics and interfaces… What other ideas will our collective intelligence produce when Mobilizon is operational and used ?

But here it is, maintaining and growing a commons requires care, time and attention. We must give ourselves the means, and at Framasoft, we hope that the support given to this project will show an enthusiastic supportive public, thanks to which we will be able to plan for the long term.

What resources are being used to produce Mobilizon ?

Creating such a tool, with no other goal than to build a digital commons, requires time, involvement and resources. At Framasoft, we are convinced of the importance that Mobilizon can have, in the long term, for many communities. But we are already working on many projects and lack the time and money to do everything…. Thus, we will not get involved without a strong signal that this tool is desired.

We have just opened a collection on joinmobilizon.org. We have given ourselves less than 60 days to know how well our approach will be supported. In concrete terms, the more you give, the more we will be involved in Mobilizon‘s development in the long term.

We have defined the following budgets :

From now on, and until July 10th, any donation made to Framasoft via the Joinmobilizon.org page will be attributed to the Mobilizon project. On July 10th, depending on the amount that has been reached, we will focus on developing the Mobilizon that you have supported. We plan to release a beta version in the fall of 2019, and a version 1 in the first half of 2020.

Mock-up of a Group page in Mobilizon

You have les than 60 days to determine our involvement

So we need your help. Together, we have less than 60 days to propose and explain this project to the associative, cultural and militant communities in France and abroad. Less than 60 days to convince them of the importance of supporting Mobilizon, without falling into the trap of easy shorthand like « it will replace Facebook » or otherwise « this is a revolution ».

It will therefore be necessary to take the time to speak, to exchange, to listen… to convince without marketing bullshit or claiming to be an authority. Because Mobilizon will not be a miracle instantaneous recipe : it is a first step towards more independence, an adventure that will evolve over time, and one that we wanted to start with you.

How far will we go ? It is now in your hands… let’s Mobilize !