« OK, so, what is Mobilizon ? How can this free and federated tool help me to progressively do without Facebook for my groups, pages and events ? And where do I go to get started, where do I sign up ? »

Let’s answer these questions with a lot of pictures, and (relatively) few words.

Conceived and designed by David Revoy (the author-illustrator of Pepper and Carott, who has just self published albums of his webcomic), Rȯse represents the people for whom we designed Mobilizon.

A fennec whose wicks recall the star of a compass rose, Rȯse is autonomous, voluntary and lives in a beautiful but arid, sometimes hostile landscape. Rȯse needs to get together with her fellow fennecs beings to organize and mobilize themselves around actions that can change her world, one grain of sand at a time.

If you don’t recognize yourself in Rȯse, don’t panic : Mobilizon might still work for you ! However, this service might surprise and confuse. You won’t find any ads, influencers, or the hobby where we watch the lives of our loved ones staged like a reality TV show.

To better understand our intentions and the choices behind Mobilizon, you can visit joinmobilizon.org (short version), or read our lengthy introductory article on the Framablog (detailed version).

Rȯse discovers an event on Mobilizon

Rȯse feels that the hyper-consumerist society in which we live is destroying the planet. One day, on one of her usual social media platform, Rȯse comes across a link to an event called « More trees, less ads ! « The title amuses and challenges her, so she clicks.

She arrives on a website she has never seen before which seems to be called « Mobilizon ». She is invited to go and hide an advertising videoscreen by standing in front of it with an umbrella. She learns that those screens are not only polluting our public spaces with images that capture our attention, but they are also equipped with cameras and sensors that analyze the number of passers-by, their reactions, etc. 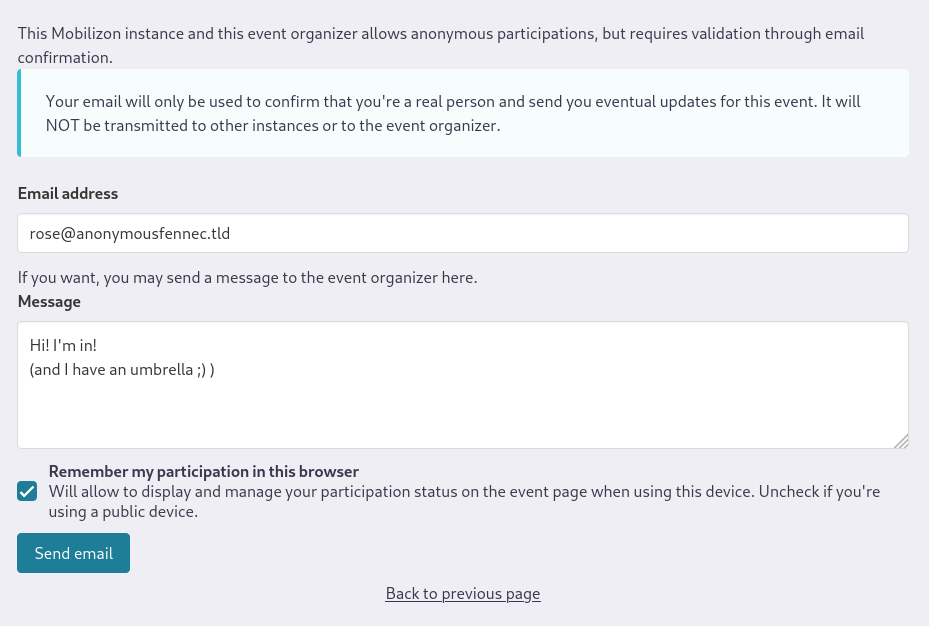 You do not need an account to participate in an event published on Mobilizon : the site simply asks Rȯse to confirm her participation by email. That’s OK, she already has a « trash » email address that she uses for her online shopping, and unfamiliar sites that may resell her contact information. 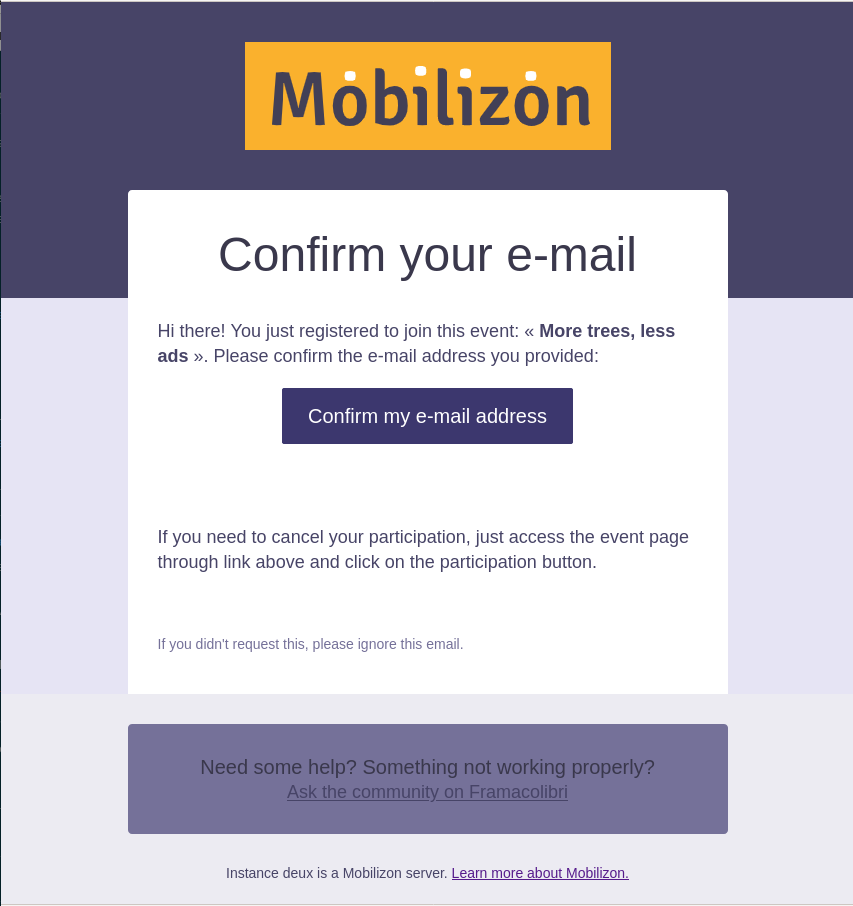 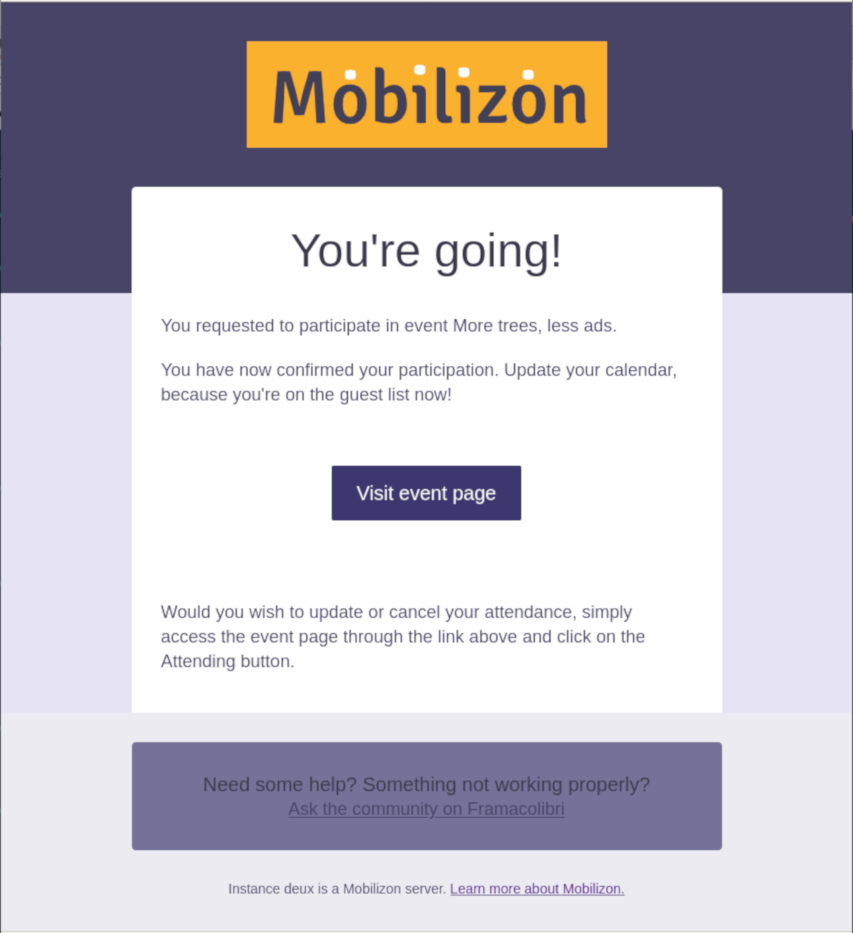 A few days later, Rȯse goes to the event site and meets the group of ContribUtopists. They invite her to exchange a quarter of an hour of her time, blocking the advertising screen with an umbrella, for a tree cutting that she could plant at home. Rȯse loves the idea and spends the morning sympathizing with the ContribUtopists.

Benedict, the group’s organiser, explains to Rȯse that these screens work like Facebook : they impose advertising in our lives while capturing our behaviors and data. He advises Rȯse to go to mobilizon.org to find out for herself about the alternative that the ContribUtopists have chosen. 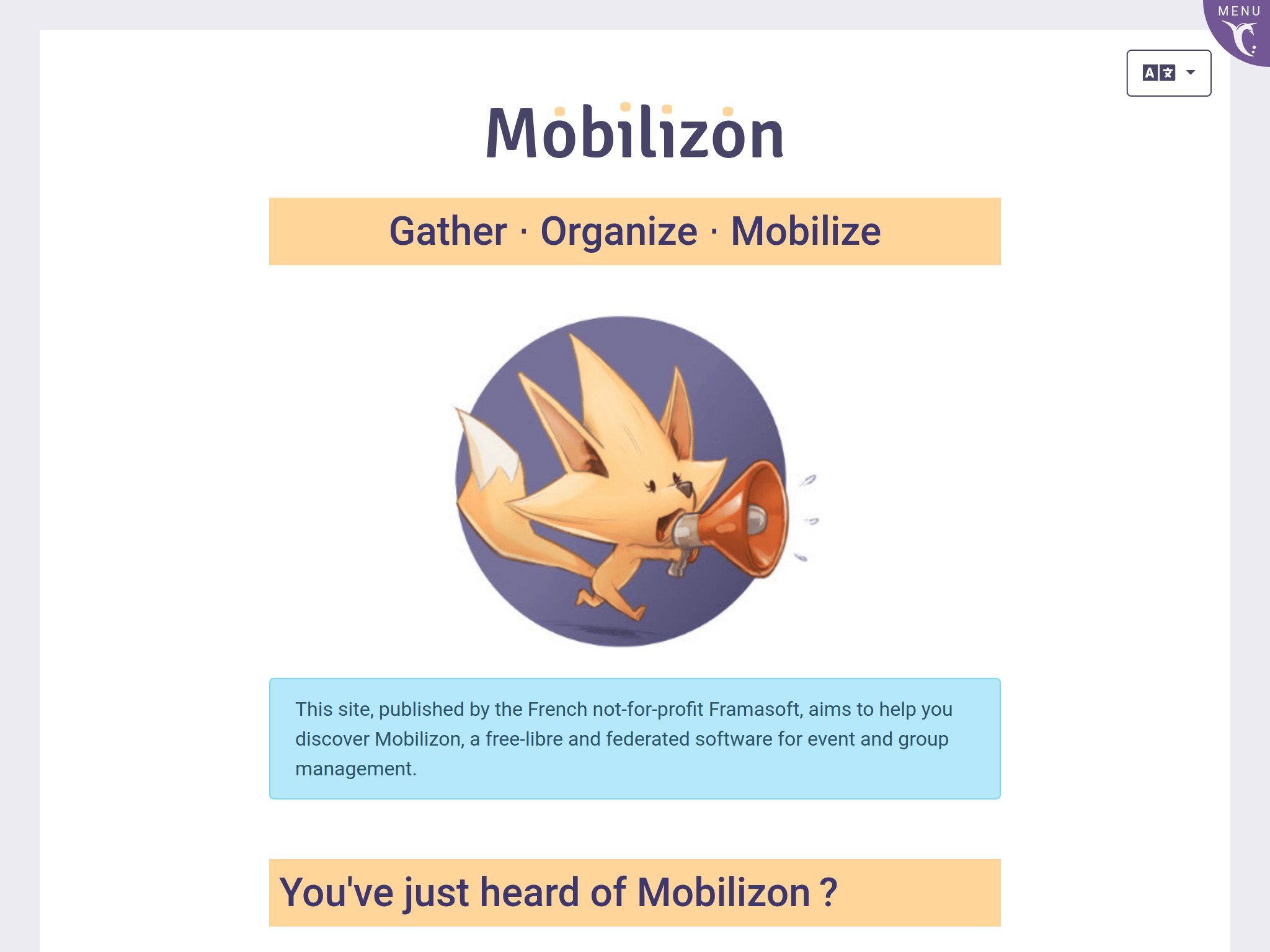 Rȯse is convinced, she wants to try Mobilizon. She understands she needs to find an instance, i.e. a Mobilizon website that will host her account and data. She tells herself that if she has to entrust her data, she wants to find a trusted host. So she goes to the « about » page of several Mobilizon instances to see how these hosts present themselves and what their rules are. 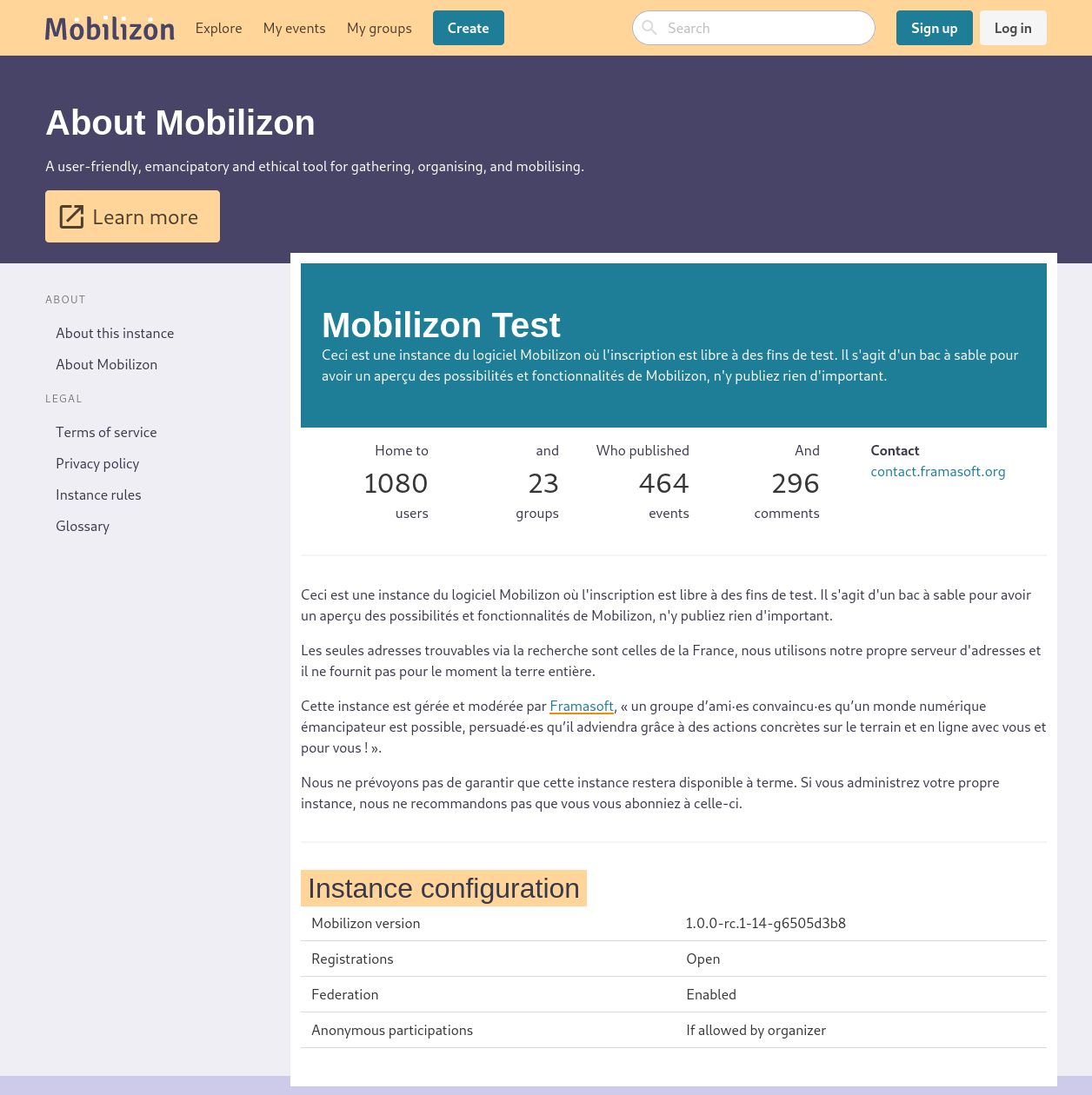 Rȯse has found her instance, and off she goes. She suspects that she is not going to leave Facebook overnight, but thinks that she can start by registering on Mobilizon, even if it means having to publish the links to the Mobilizon events and groups she wants to promote on Facebook. 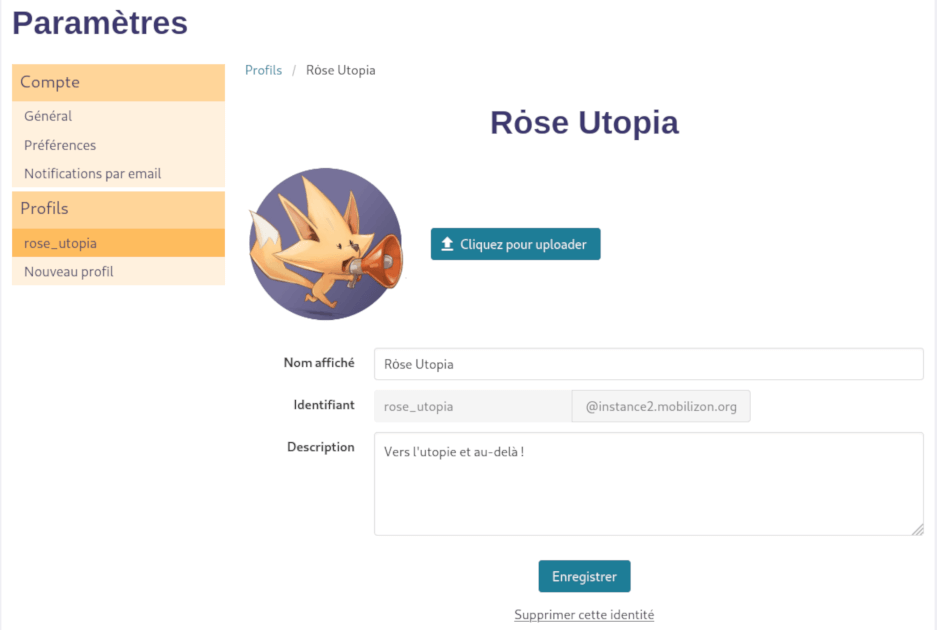 Rȯse wants to join a group

Once her account is confirmed and her profile complete (finally a site that doesn’t require acres profile information !) Rȯse goes to the ContribUtopists page to join the group. 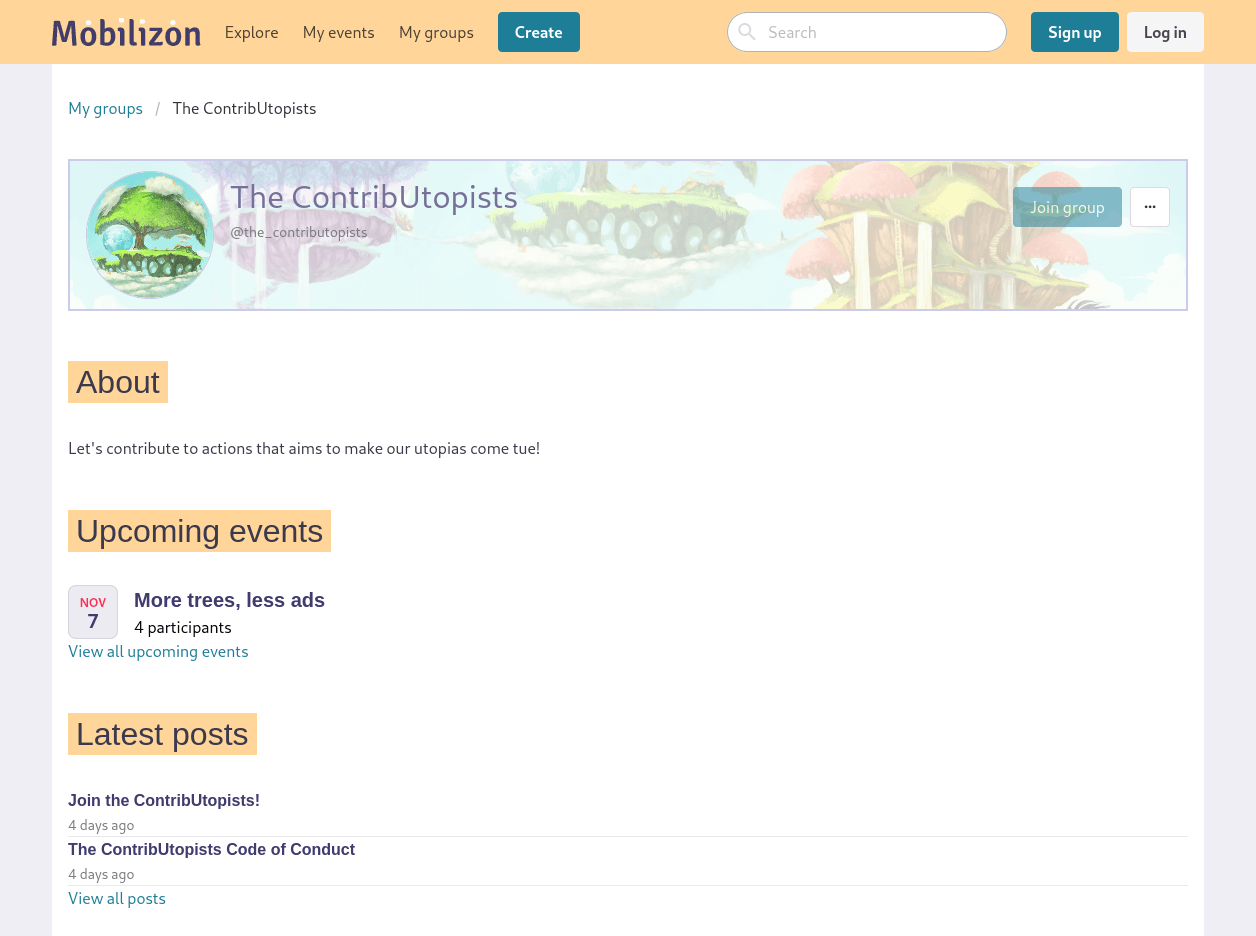 Unfortunately, the « join the group » button does not work and is grayed out. Obviously, you can’t ask to join a group, you have to be invited. When Rȯse looks into the matter, she realizes that it’s just a matter of time before this feature is added to the site. 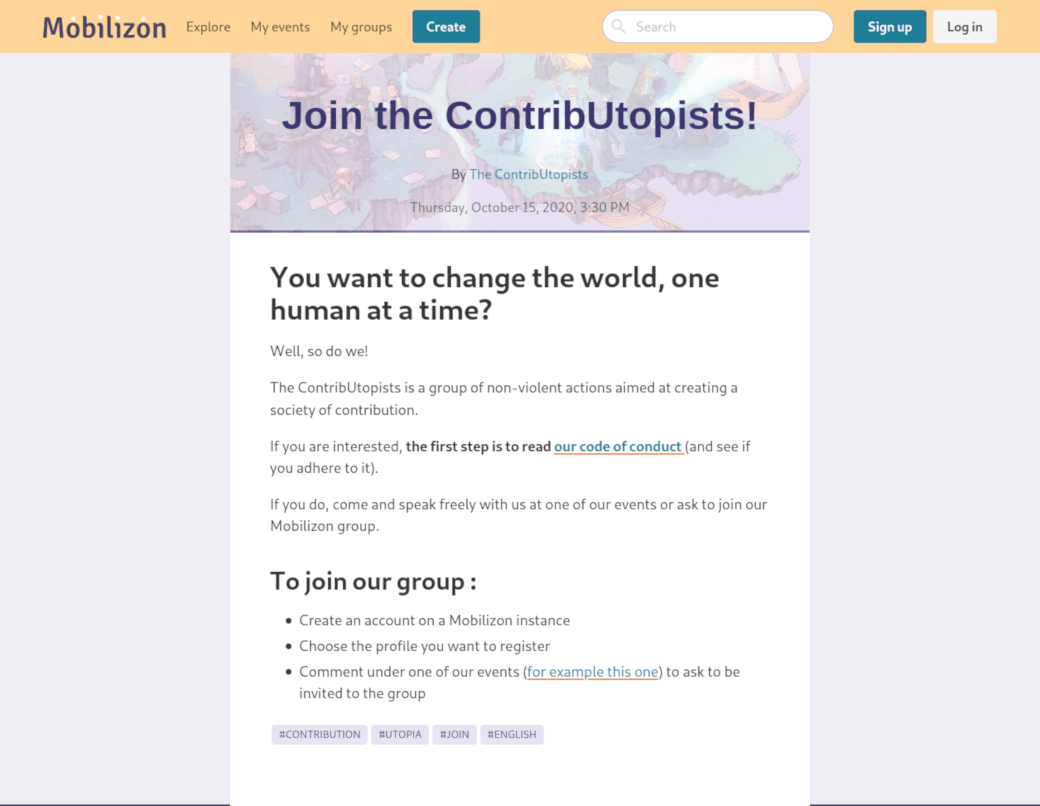 She follows the instructions and goes to the page of the event she attended and adds a comment reminding everyone who she is and asking to be invited to the group.

The surprise birthday of Rȯse’s mother

Rȯse’s mother’s birthday is coming up. Narcisse Boréal, her dad, asks her daughter how to organize a surprise party without using Facebook, so as not to blow the whistle. Rȯse, the family geek, explains to her dad how to create an account on Mobilizon. 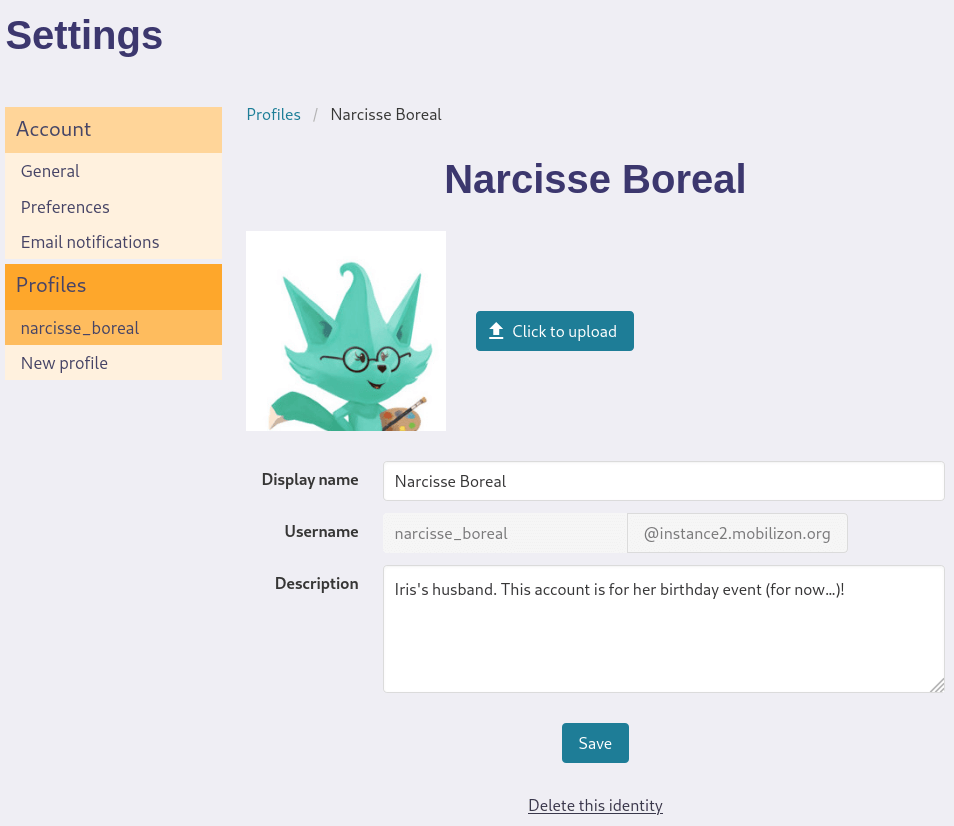 Narcisse creates an event to invite family and friends to his partner’s surprise birthday party. It’s a fairly short form, and the options are self-explanatory.

Rȯse goes to her Mobilizon instance, but does not see the event created by her father. She realizes that he has registered on another Mobilizon website, another instance. Fortunately, these instances are federated : using the search bar of her instance, Rȯse can find the event that her father has created on his instance. 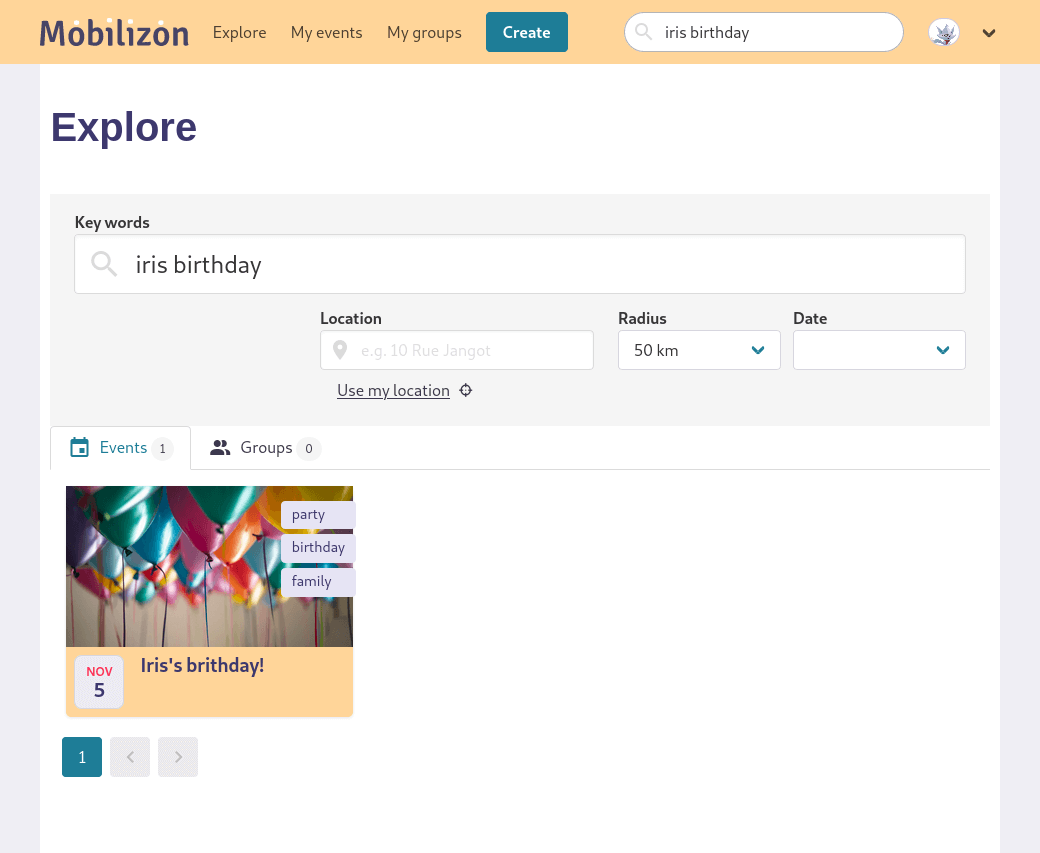 Rȯse hesitates to register for her father’s event. She doesn’t want her family to see that she used this account for her activism within the ContribUtopists ! So she decides to go to her account settings to create a new profile. 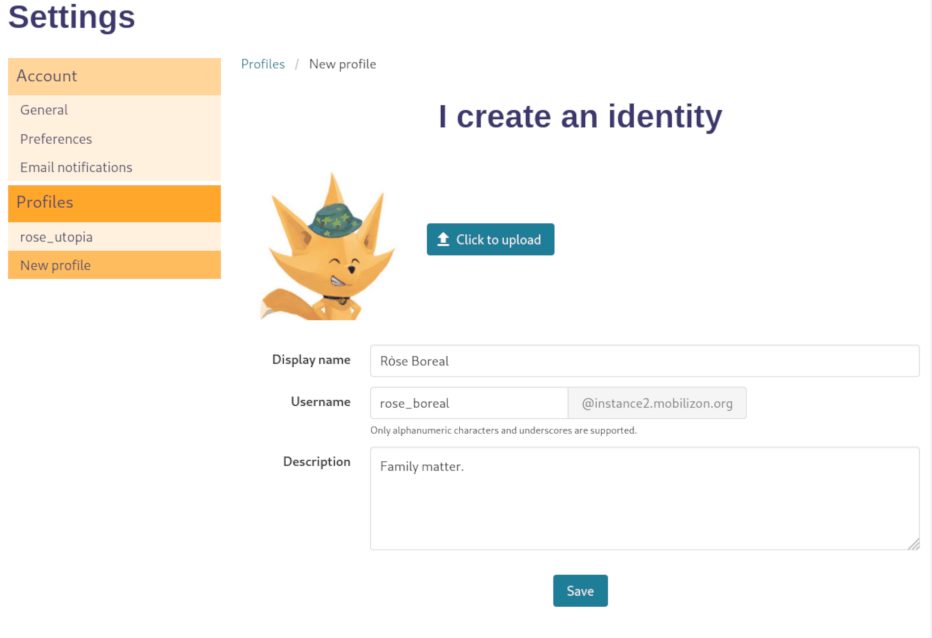 Rȯse registers for her dad’s event with this new profile, which she will use only for family events.

She takes the opportunity to share the event with a few family members and then exports the event to add the date to her online calendar. 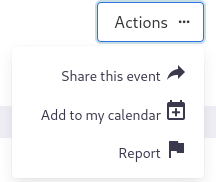 In her notifications, Rȯse notices that the ContribUtopists have read her message and invited her to join the group. She goes back to her activist profile to accept the invitation. 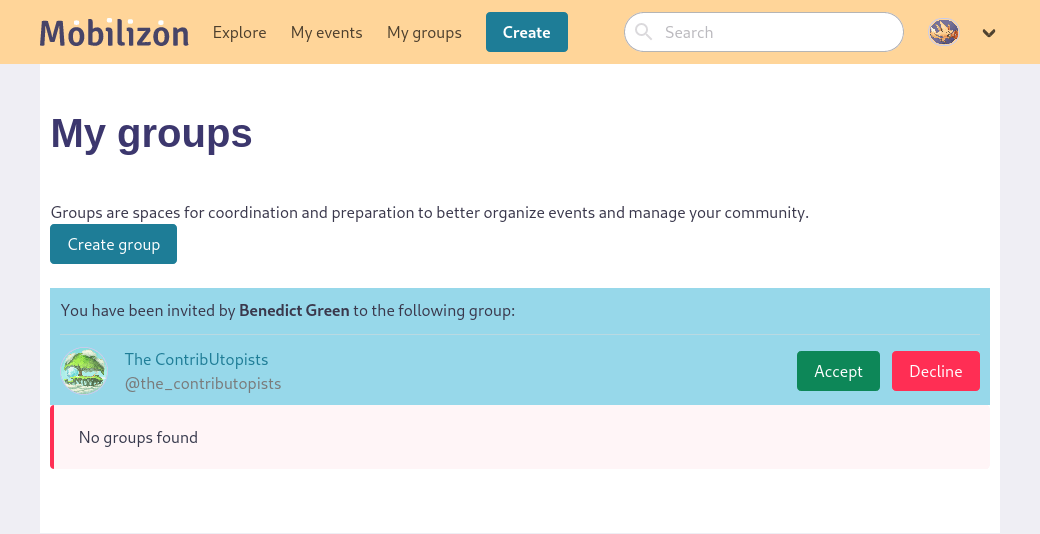 In the group, she sees a new discussion about the lessons learned from the previous event and the group’s next initiative. 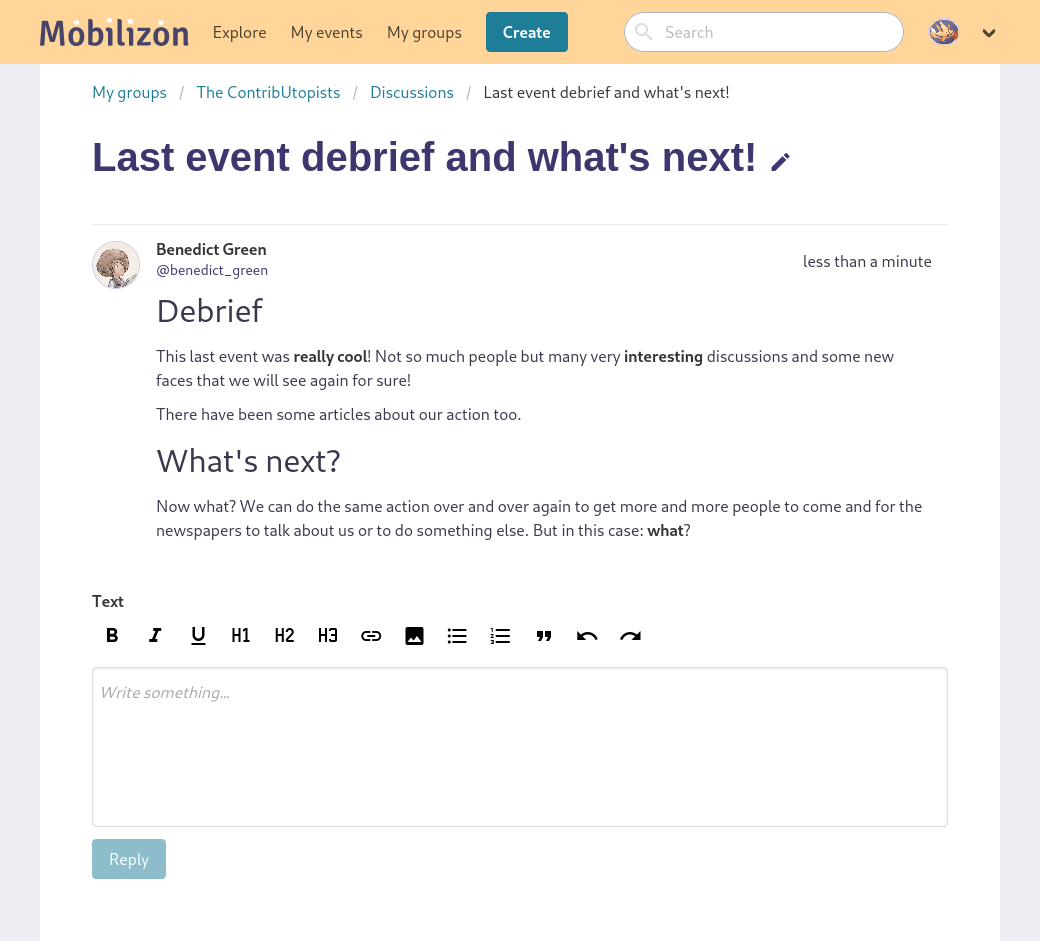 After a few weeks, Rȯse’s involvement and commitment did not go unnoticed. Benedict, the administrator of the ContribUtopists group on Mobilizon, decides to promote Rȯse as moderator of the group.

Becoming a moderator will allow Rȯse to organize the next ContribUtopists event. She creates a draft of the event « Another Collage on the Wall » to discuss it with the group. 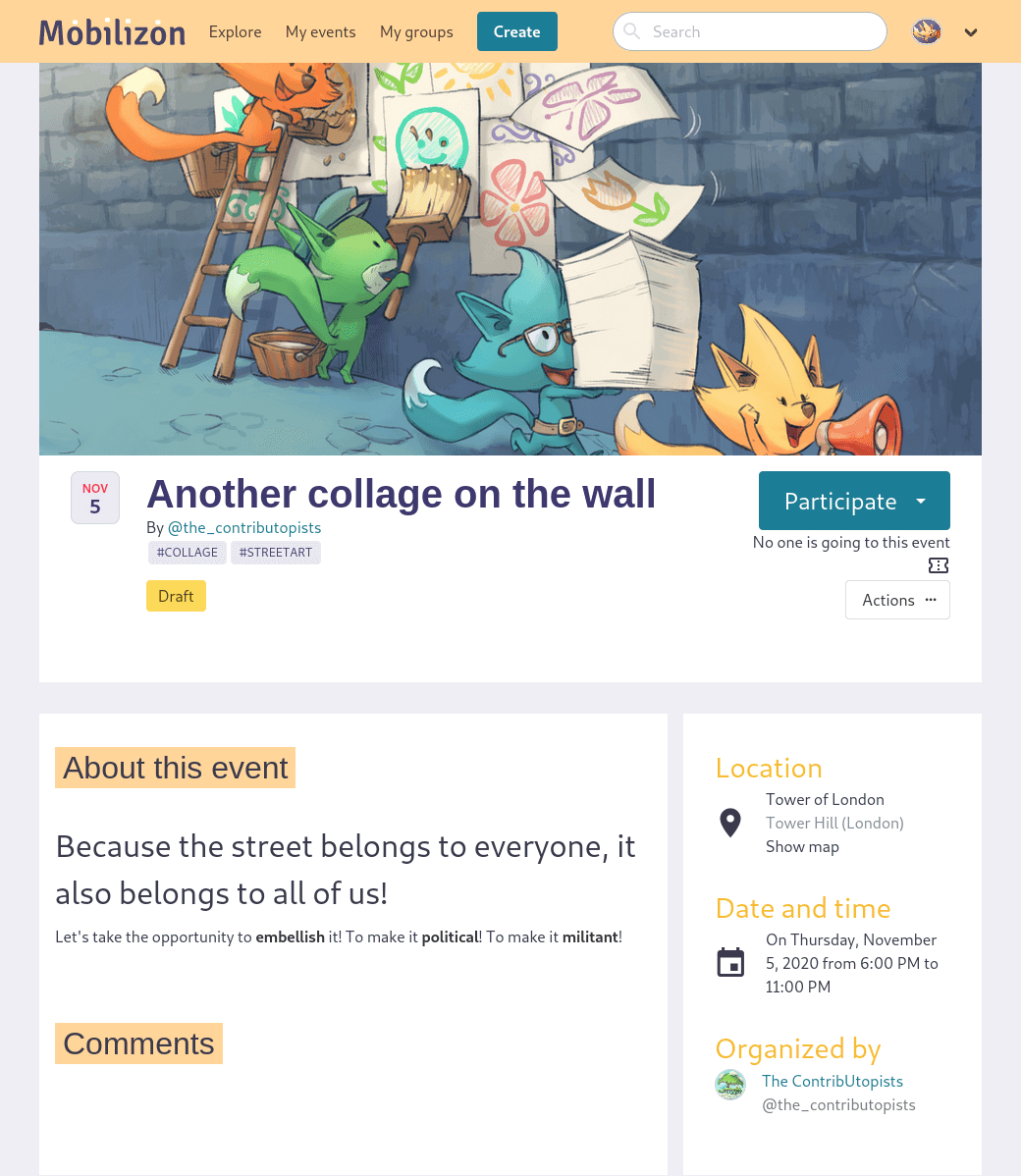 However, Rȯse does not know how to best describe the event. She decides to make collective intelligence work for her and create a collaborative writing pad. On Mobilizon, this is done in two clicks, from the group’s Resources space. 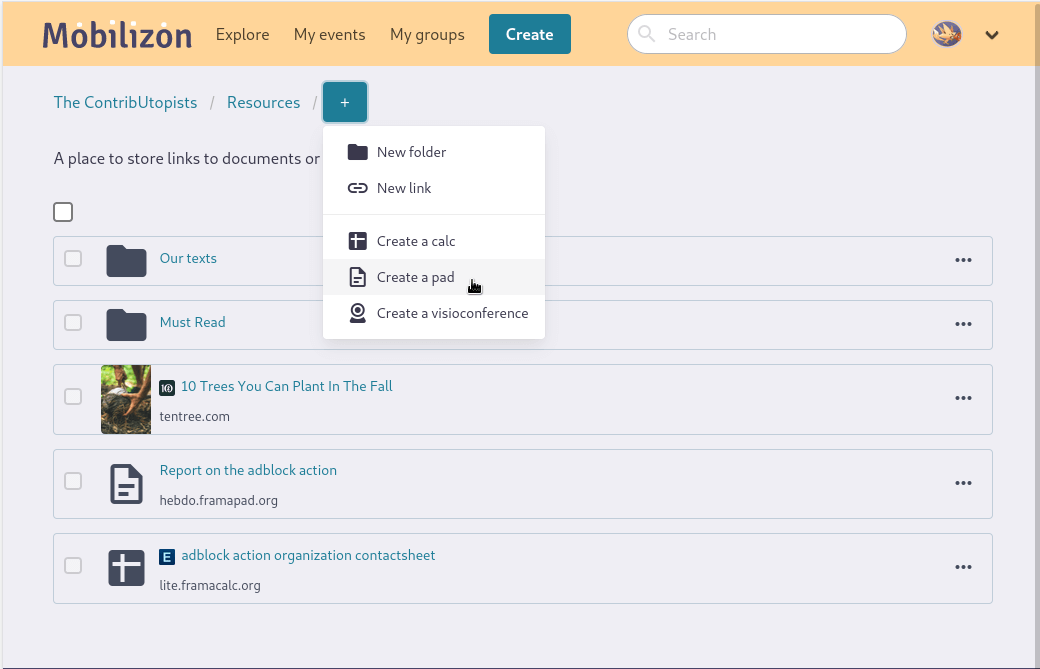 The group worked well, the text is great. Rȯse just has to put it in the Another Collage on the Wall event description and publish it ! 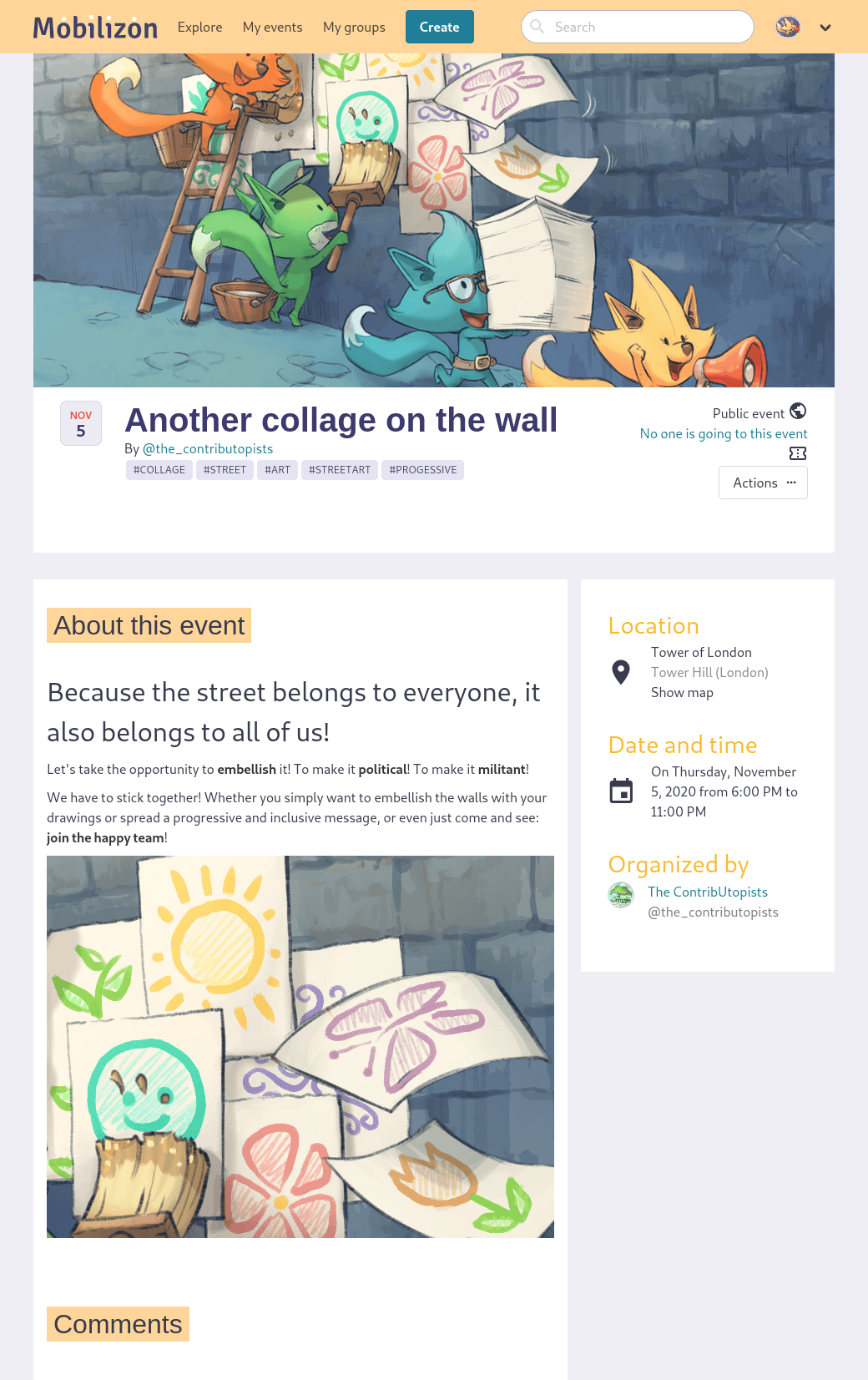 A few days later, Rȯse goes to the event. What a joy to see so many people registered ! Suddenly, as she was reading the comments of the event, Rȯse utters a little cry of surprise : 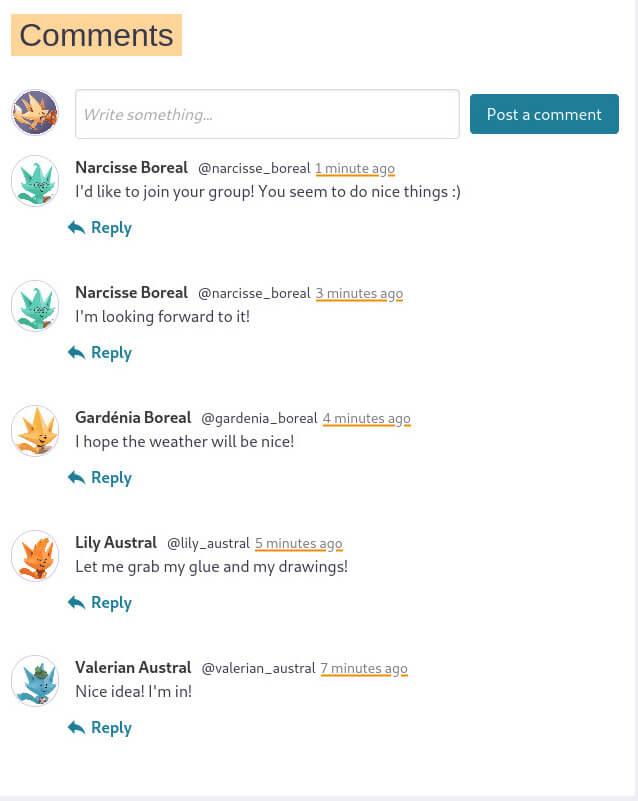 Several members of her family registered for the Another Collage on the Wall event, without knowing that it was Rȯse who had organized it ! There’s even her father asking to join the ContribUtopists.

With a smile, Rȯse thinks that she will have to show them how to create several profiles on Mobilizon, if they are interested.

Mobilizon.org, our gateway to Mobilizon

That’s why we created Mobilizon.org : it’s THE site to remember and share, which will direct you to

It took time and hard work to create all these tools. Our small association (35 members, 10 employees) is financed almost exclusively by donations. If you would like to support this work and encourage us to continue, you can do so by making a donation, which is tax deductible for French taxpayers.

Another way to support our actions is to take them over, use them and make them known. From now on, it is up to you to get together, organize and mobilize… with Mobilizon !