Thanks to your donations, we have been developing a software to free us all from YouTube & Co for a year. Why have we gone much further than the first release, (crowdfunded in the spring of 2018), you might ask ? Well, that’s because we sincerely believe in the emancipatory power of PeerTube.

This article is a part of « Contributopia’s travel journals ». From October to December of 2019, we will assess our many (donations-founded) actions, which are tax-deductible for French taxpayers. Donate here if you can.

Federation and instances to avoid creating a new tech giant

PeerTube’s aim is to create an emancipatory alternative to centralized platforms a la YouTube. In a centralized service, you sign-up with a single address, and each and every of your actions, videos and data are gathered on a single huge computer. For example, Google’s, that hosts YouTube (to be precise, they are server farms rather than huge computers, but on a symbolic level it is the same thing !). 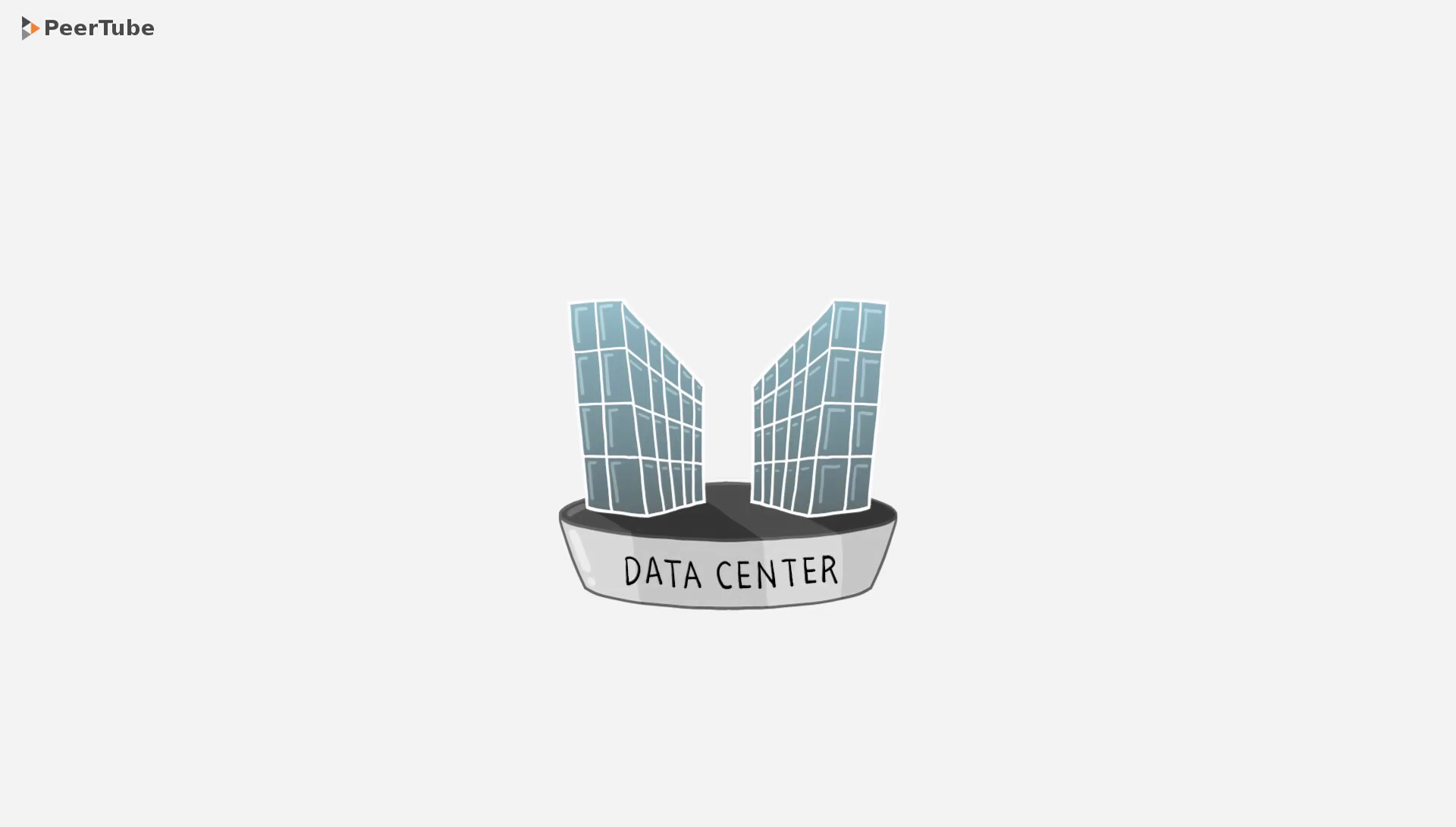 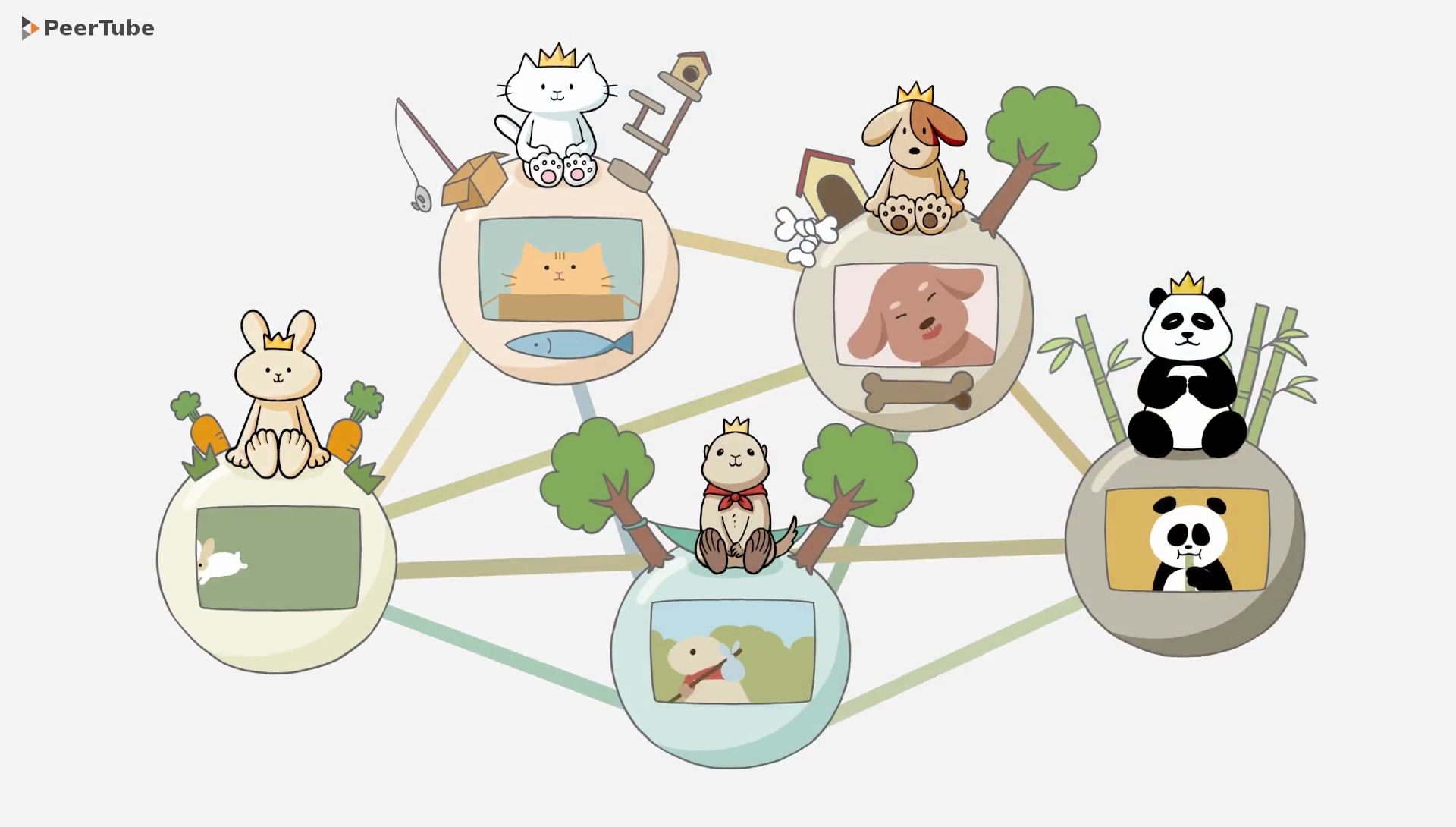 PeerTube is a software. It can be installed on a server by anyone possessing the appropriate skills ; say, for the sake of argument, Bernadette, College X and karate club Y. This is called an instance, i.e. a PeerTube host. In concrete terms, hosting an instance creates a website (let’s say, BernadetTube.fr, CollegeTube.org or KarateTube.net) on which you can watch videos and sign-up, so you can interact or upload your own content.

These instances can chose to follow each other (this is called federating). For example, if the head of IT services of College X would like KarateTube videos to appear on CollegeTube, all she has to do is federate with KarateTube. KarateTube’s videos will remain on its server but students who are used to watching videos from CollegeTube will be able to see them.

In this case, BernadetTube stays isolated, but CollegeTube and KarateTube are federated. Rather than creating a single gigantic platform, PeerTube allows for the creation of a multitude of small, diverse, and interconnected platforms.

One year of work to let PeerTube mature

In May of 2018, we started a crowdfunding for PeerTube’s development. Many people decided to give a chance to a software that allows the creation and federation of video platforms. In October of 2018, we « turned in our homework assignment » as they say, when we released the first version of PeerTube.

We could have stopped once our promises were fulfilled, and let the community develop this free/libre software on its own. Instead, we decided to use a part of the donations we receive for everything we do (thank you !) to make PeerTube’s main developer job durable. As a Framasoft employee, he also contributed to other free/libre softwares such as Framacalc-Ethercalc and Mobilizon.

Nevertheless, during the past year, his main mission was to improve on PeerTube. He was able to rely on a growing community of contributors, and no one was idle ! In one year, PeerTube was enriched with, amongst other things :

Small bonuses make all the difference !

We will now highlight 3 features that we particularly like, as they offer more freedom, comfort and control to PeerTube’s users. Considering more control is not part of the business models of mainstream platforms (greetings, Youtube, Vimeo and Facebook videos !), these three features offer PeerTube’s users a unique experience.

When you share a video link, most platforms offer a « start at » option, which makes the video begin at 53 seconds if what you would like to share starts at 54 seconds.

We simply added a « stop at » option. It might seem silly (and really, it is) but considering YouTube’s job in the attention economy is to capture yours to sell it to Fanta, it is obviously unimaginable for them to let you stop videos !

If in a given videos, you only care about 3 sentences between 1:23 and 1:47, you can single them out, share or keep this clip for yourself (e.g. in your liked videos playlist or any other playlist). This feature allows for may uses : zapping, educative content, etc. We at Framasoft find that so much potentials lies in this idea !

Every administrator and user wishes to see the software fulfill their needs. As Framasoft cannot (and does not want to) develop every feature that could be hoped for, we have from the start of the project planned on creating a plug-in and add-on system you can install to customize your PeerTube experience.

Once again, we can see that centralized platforms have locked us up in such a standardized experience that it’s hard imagining that a concept as old as this could be such a breath of fresh, free air. And yet !

Now, this system allows each administrator to create specific plug-ins depending on their needs. They may install on their instance extensions created by other people as well. For example, it is now possible to install community created graphical themes to change the instance visual interface. You could also imagine plug-ins to sort videos in reverse alphabetical order, or to add a Tipee, Paypal or Patreon button below videos !

Offering a new type of video player (for nerds : based on HLS technology) is a risky endeavor for a tool as new and interconnected as PeerTube. Considering PeerTube’s young age (it is barely starting to make a name for itself and to be adopted around the world), this could cause incompatibility issues and very problematic differences in versions.

However, we have decided we would introduce it experimentally, starting last summer. Indeed, this new video player is promising : it is faster, has less bugs, makes it easier to change video definition and makes their load fluider (still using peer-to-peer technology). In return, it requires updating some elements (moving to ffmpeg 4.1) and to re-encode some videos.

This new video player has been met with a great deal of enthusiasm, and broadens PeerTube’s future (live streaming, for example, is out of question using the current player). This is why we want to take the time to make it PeerTube’s player by default, which will require work to help current hosts in this transition.

V2 is even more federation-focused

The PeerTube version we are releasing today already includes all these improvements, and many more ! This « v2 », as they say, aims to make it easier for instance administrators to federate. They will for example be able to automatically follow instances that follow them, or to follow instances visible on our JoinPeerTube public register.

Camille doesn’t know a thing about servers or whatever, but he wants to create an account to follow PeerTube channels, or even upload his own videos… And he has a hard time understanding what this is all about ! How could he possibly know that BernadetTube is only maintained by Bernadette and that if anything were to happen to her, she could stop administrating it overnight ? How can he see that CollegeTube refuses to federate with instances that display sensitive content, even properly flagged and blurred ? Where can he learn that KarateTube will favor videos in German, and that support will only be provided in this language ?

When Bernadette, the head of College X IT services, and Karate club Y’s resident nerd will have updated PeerTube with this v2, they will have to fill in a form to better introduce their instance. The goal here is to clearly state :

Camille will be able to find all these information on the « about » page of each PeerTube instance (which will now also display new statistics), on the sign-up page… as well as on the joinpeertube.org register !

JoinPeertube.org is where you get your bearings !

With over 100,000 videos and 20,000 accounts, it is safe to say that PeerTube has become popularized. It was high time we revamped joinpeertube.org so as to turn it into a front door to these videos, hosts and the federation.

With the help of UI/UX professionals, we have imagined and shaped two user flows to using JoinPeertube.org : one for people who want to watch videos (and maybe sign-up), and another one for video makers who need a trustworthy host for their videos.

Both of these paths may lead you to the register of public instances. You can sort them according to your preferences so as to find the one that meets your needs. This selecting is made possible by the answers given to the form mentioned earlier, which allows admins to better introduce their instance and to explain the project behind it to potential users. That being said the best solution is to have a look by your own means (as a side note, we find the site much prettier now !)…

Please note that PeerTube now has its own documentation website, meant for both admins (to ease the software installation, maintenance and administration) or for regular users (whether it be for signing-up, managing your playlists or uploading videos).

The future of PeerTube is still YOU !

It would be impossible to name everyone who has contributed to the code, funding, design, translation, documentation, illustration and promotion of PeerTube… but the least we can do is to express our gratitude !

After one year of development and maturation of the project, we are putting a lot of thoughts into its future. People have different wishes, you guys have given us a lot of ideas. All of the feedback we are receiving from you, particularly on the dedicated section to PeerTube on our forum (the best place for your suggestions !) is invaluable to us.

Nowadays, we are imagining new improvements (to the interface, user experience, search engine, plug-in system), important tools, (mobile apps, videos about PeerTube), as well as new, powerful features. Would you like to easily remix online videos from your PeerTube account ? to do livestreams ? So do we ! And we need your support for that !

We are allowed to have all types of dreams and aspirations for PeerTube, but what is sure is that making come true will have a cost. The year we have spent developing PeerTube was funded in part by what was left of the June 2018 crowdfunding, but mostly by regular donations we receive for all of our projects. We will probably launch a new crowdfunding campaign just for PeerTube v3 in 2020.

In the meantime, feel free to help PeerTube grow, to promote instances and videos you like, and to congratulate the whole community for how far we have come with this v2 !

Have a look at Contributopia’s travel journals and discover more articles and actions made possible by your donations. If you like what you just read, please think of supporting us, as your donations are the only thing that allow us to go on. As Framasoft is a public interest organization, the real cost of a 100 € donation from a French taxpayer is only of 34 €.